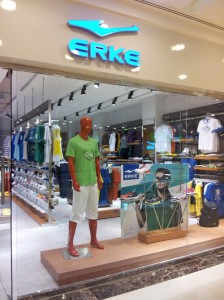 Erke is an international sports brand and part of the Chinese company HongXing Erke Group.  The brand specialises in sports apparel and has sponsored major sports icons within the Chinese Olympic team.  Erke was also the official kit sponsor for the Korea DPR national football team.  Owned by China Hongxing Sports Limited, which is listed on the Singapore Stock Exchange, Erke’s products have won many awards and accolades across the People’s Republic of China (PRC), and are also available in Malaysia and in Europe.

The company has recently rolled out Eurostop’s retail management and e-pos till systems in 7,000 outlets across PRC.  The deal makes Erke Eurostop’s largest ever customer.

Eurostop worked closely with Erke to manage the rollout and integration of the systems with Erke’s IT infrastructure and management systems.  Eurostop implemented its e-pos systems across 4500 stores and its newly designed web e-pos in a further 2500 stores in just four months.

Erke, a large operator in the sports clothing retail sector, has experienced tremendous success and growth in the last few years.  As it expanded, it has outgrown its management systems and needed a robust solution that could cope with the volume of stores.  The speed of rollout was important to ensure that all the outlets were up and running quickly and to ensure smooth transition from the old system.

The Eurostop team (comprising of a local team in China) worked closely with Erke to install e‑pos in their stores. Despite the stores having a variety of hardware, the Eurostop software was able to be rolled out remotely via a downloadable installation package with a built-in wizard.

The web e-pos software is used in the concessions on a variety of devices – laptops, iPads and other tablet PCs – to manage sales of stock, returns and transfers. The 4500 stores that have the e-pos installed at till points also have the customer loyalty modules, enabling them to identify customer purchase habits and create tailored promotions and offers to regular customers.  Erke is the first company in China to have such a large number of physical till points in stores.

The Eurostop team consulted with IBM, who are partners with SAP in China, to integrate e‑retail with the SAP solution.

“The UK development and project team played a key part in the integration of e‑retail with Erke’s SAP system,” said Roy Meunier (Eurostop Overseas Support Manager).  “Not only did we have to work closely with IBM and SAP, we also had to integrate with the previous retail system used at head office, before the transition to SAP.”

A SAP Representative commented at a project meeting that the Erke-E68 Project had taken only 7 months to complete and that similar projects have taken much longer.  The spokesperson went on to say that for Eurostop to roll out tills to over 6,000 stores in just 4 months is an incredible achievement and the results are simply outstanding.

The scale of the rollout has required training to be implemented using a ‘train the trainer’ approach.  Eurostop provided comprehensive training for the Erke global IT team on the installation process, who have gone on to share their knowledge with the IT specialists in each of the 28 sub-companies.   Mr. Michael Li (Senior Project Manager for Eurostop Shanghai) is very impressed with Erke’s IT staff.  According to Michael, they have been totally committed to the project.  It made all the difference.

Erke expects significant efficiencies through tighter stock management across its outlets and more accurate sales performance data through using the Eurostop systems.  Mr. Lee (Project Manager for Erke) says “We now have one of the largest estates of tills in the whole of China.  Not many companies can match the speed of our implementation.  The success of the project has been down to teamwork and a great deal of effort from all parties concerned – IBM, SAP, and Eurostop”.

Sign up to our newsletter to keep up to date with the latest in retail news.